Since I got
My Character Bios sort of up, it's time for me to open up a plotting thread, I suppose?

I prefer closed RPs of either 2 people or a small group!
If it's 2 people, I want the other person to be my age or a bit older, and not TOO much older
(Yes, even though this is a pg-13 site! It just makes me a bit uncomfortable)
BUT in small group RPs I don't mind age a bit! It feels more like those tabletops I've done irl, and my groups always had a very large age range haha

Now moving on:
I'm not that big on big fighting scenes if my characters have to be super involved
(None of them are great fighters anyway! The lame-ohs)
I don't do that well with characters that won't talk to mine much?
As cool as your suave and handsome stranger staring into the sunset probably is... I get a bit lost on what to do D :
I... Don't really give long responses
(A couple sentences is going to be my usual, two paragraphs? Max? I'm a casual, man)
You don't have to tell me if you drop the rp, but it's nice~
(And really, I don't mind if you want to OOC tell me if something is going bad for you in rp that I could fix? I can take it, I'm a big girl.. Or a big whatever I am. Girl is shorter)


I don't really have any particular plots in mind at the moment, but I wanted to go ahead and type up that big mess up there, so hey!
Feel free to shoot me some ideas! And if they're for a group one we'll make a separate thread to gather some people for it~ 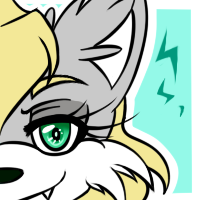 Your OC wakes up net to a burned out campfire with no memory of...well anything besides who he/she was, the character than sets off to find his/her lost memory, with the help of others of course.

That's probably the most cliche plot there is but whatevs it's the best I could think of within 3 seconds, if you can think of a better plot than go ahead and do so, I really lack the understanding of 'plot' if you know what I mean.

I do basically just mean an RP starter, to be honest, so you're on the right track there~

Maybe something more like
Mild memory loss for everyone who wakes up at the campfire/wherever they wake up
And it could be some strange place they don't remember at all, so they're trying to escape it and also figure out how the heckie they got there in the first place~
_________________
Icon's Artist Linked here!