((My iPad crashed earlier and deleted EVERYTHING. So it may not look as good as it did before it all went down the drain. Also, I'm not good at writing bios and histories, but I'm not a bad roleplayer. If you need an example, feel free to ask me.))


Place of Birth: Earth (Parents were from elsewhere)


*Beverage: Water depending on occasion, most juices, milk


Fur/Hair Color: Dark grey, orange. (Instead of this design, the design is an orange arrow on his head, and in smaller arrows, it weaves around his other quills. I am going to redraw him like that soon.


Accessories: Jewelry: Sometimes Techa wears dog tags around his neck. Markings: The weaving arrows on his head, and the spiral mark on the back of his neck.


Technological: Techa is good at putting useful machines or tablets together.


Mechanically Sabotaging: The hedgehog is also really good at taking things apart. In this case, he is capable of being a big part in a sabotage mission.


Remains Calm: In desperate situations, Techa has an advantage to calm himself down and only focus on getting the situation over with instead of fussing over what's going on around him.


Clumsiness: Despite his working hands, his feet don't work very well. Tripping, falling, bumping into things, etc. Are all big, bad habits for him.


Zero Tolerance: Pain gets to his head easily. He has a high endurance rate, but if he gets a large or midsized cut on his hand, he starts freaking out and desperately searches for a bandage or something to cover it with. (That's why he wears thicker gloves.)


Anger Issues: Techa really can't stand being annoyed and might throw a brick at your head if you continue doing so. This happens when he's really focused or concentrating hard on something.


Uncle Barry: Techa's close uncle who has a lot in common with him. He sees him more like an older brother.


Sister Cheryl: Techa isn't much of a fan when it comes to talking to Cheryl. She makes fun if him for who he is, and she's a prissy, little brat.


Mom: Techa loved his mother with al his heart and she supported him like a beam holding up a building. No matter the situation.


Dad: Techa's dad was too dominant and strict. Discipline was his first thought, and abuse was the second. It's affected Techa a lot when staying around others' fathers.


Other than his uncle, Techa never got along with anybody. His anger drove him in the wrong direction.


Dad: Now that Techa is older, he's been capable of fighting or talking back to his father without getting whooped for it.


Sister: Cheryl has a bad habit of taking Techa's things and teasing him with them before running off.


He hasn't had much say-so in life or death situations. Other than talking with his father.


Armor: If he's out somewhere, he'll wear knee pads with spikes that are curved upward on them. He uses these as a weapon, metal gauntlets.


Flexibility: Techa is very flexible and capable of dodging a few shots this way. But his clumsiness takes a bit away from that.


Beatboxing: Techa is an expert at beatboxing. Probably the best around. Sometimes he will do it during battle to stay calm and cooperative. But, this makes him vulnerable from behind.


Taunting: Techa enjoys taunting others, but his comebacks aren't genius.


Multitasking: Techa is able to think about one thing while focusing on a whole other topic.


Psychic Ablitities: Techa isn't really psychic, but sometimes, the things he thinks about will sometimes happen in the future.


Electricity: Techa can use some of his energy to create electronic pulses that can disorient an opponent temporarily.


Strengths: Techa isn't bothered by taunts or offensive actions. They don't seem to get past the hard head of his.


Weaknesses: Despite his tolerance for taunts, he doesn't like people talking about his father.


Eye contact can make him lose focus and concentration.


Sanity: His thoughts are a bit crazy. By accident, he will come up with a plan that involves tearing somebody limb from limb or beheading somebody. So I could say that he's a bit crazy.


(how they act in certain happenings or to other people)


*Family: It depends on who he's talking to. With his uncle and mother, he enjoys being himself and talking about his likings. But when he's around his father or sister, he tends to be very quiet and antisocial. If not aggressive.


*Friends: If Techa had a great amount of friends, he would be a strange weirdo that never stops talking or asking questions.


*Rivals: Doesn't speak to them and gives them angered or blank expressions. You could never think of him being himself if you are his rival.


*Enemies: It usually ends with him putting a target up on his wall with your face on it and throwing knives or darts at it. If he's around them, he's planning an attack or staring at the floor.


*Firey: Not too great with handling them. Stepping onto numerous rocks to try and avoid stepping in lava frightens him to the core.


*Wet: Techa enjoys wet environments. They are never too hot, but rarely too cold at the same time.


*Desert: Since when is Techa prepared to battle harsh days and freezing nights? He'd have a panic attack if he ever found himself stuck in one of those places.


*Mountainous Terrain: That's where Techa relies on his vehicles. He has his own vehicle that can drive up slopes less then 90 degrees in angle.


*Boats: Seasickness is one of his downsides. That's why he tries to avoid boats.


*Vehicles: Any sort of land or air vehicle works just fine for him. He's built a few himself.


*Cityscapes: Cities are too crowded for him. Sitting on a grassy hill and peering at the landscape is something he would rather do.


*Crowds: Techa doesn't like crowds and tries to avoid them as much as possible.


Clothing Theme: More of a dark or quiet style.


Techa had lived a normal life for a while with his spray family, but a lot changed when his and his friend's apartment burned down in a fire that a troublemaking civilian had caused. His mother was killed and his friend was too. That was around the time Techa decided to start making his gift helpful to others. Some of them included house protection systems or burglar systems. Even sensitive fire alarms.


But now, Techa has been using them for his own defense. A loss to a fight with another civilian led to him making heavy duty weapons and armor. He doesn't use many of them because of their weight, but he uses them occasionally. 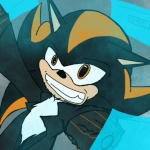