Current Residence: Dimension Hops Between Mobius
and Sol Dimensions when he feels like it 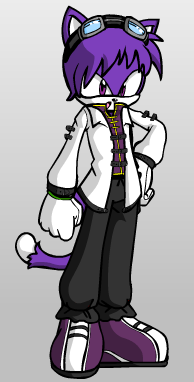 Perks: Has known fire elements since the age of 4, good with
swords, is very agile, can be helpful

Flaws: Is made 70% out of fire-based particles and
as such will die from touching water, is very cocky,
cannot endure much pain

(how they act in certain happenings or to other people)

Attitude: Calm and Collected When Alone or with Gala,
Annoyed near other people

Yuni Kokiyo Tanakeru never knew who his real parents
were, he woke up from being trapped in hardened lava after
many years. Gala, his brother, was preserved via
the only means of cryogenics; freezing yourself. When Yuni
woke from his slumber, he was left with the Scarlet Buster,
the sword whom his Father left with him. Gala was left with
the Violet Reaper, a purple Scythe left by their Mother. Yuni
spends most of his time hopping between Dimensions using
the Dimension Hopper embedded inside his hand, by focusing on
where he wants to go.
_________________
Light burns darkness, as darkness creeps into light. Flames melt the ice, as ice cools down the flames. There is balance in everything, you just gotta see it.