Appearance: has the same body frame as a metal series model with a forest green color, five yellow tipped quills with yellow inner ears. Has larger green plating around arms and legs and a grey and yellow shoe color scheme. Has three small yellow triangles arranged in an upside down triangle shape around his intake port on his front. His face is less intimidating with a more open and kind look with green eyes and fully expressive mouth. there is also a mobian ring that fits in the rim of his engine intake on his front, this is his core, his personality and mind are encoded on this ring. 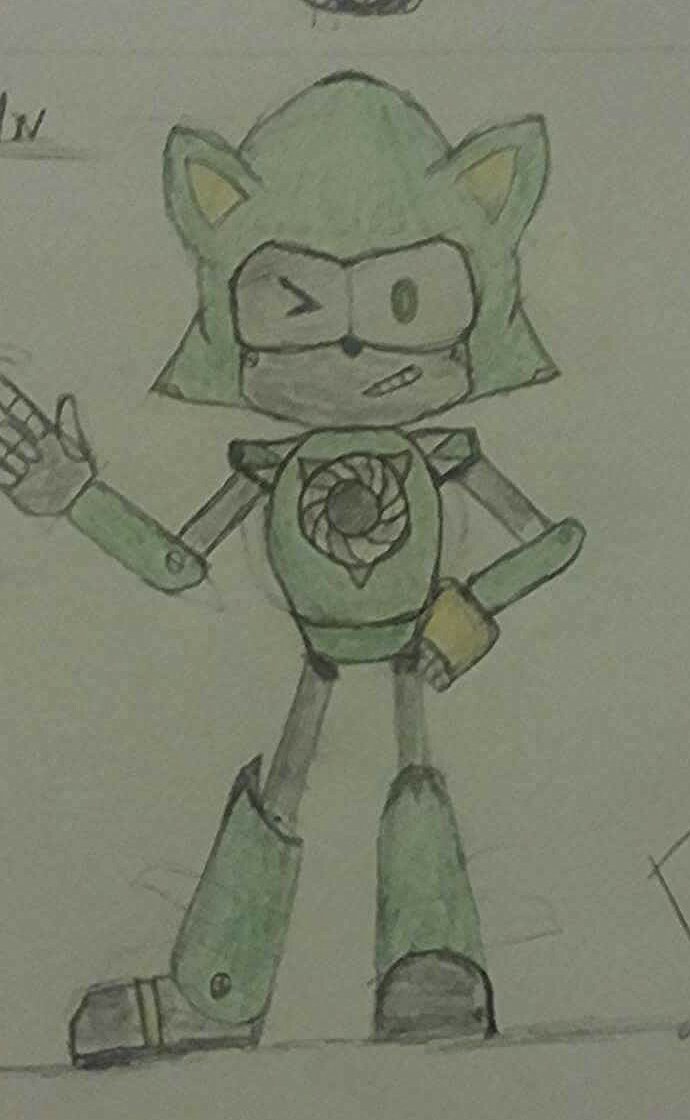 Dislikes:
-destruction and pollution of nature
-water, he's water proof but can't really swim
-winter due to ice weakness
-being dismissed as just a "machine"

Personality: very upbeat and loves music, can be very oblivious to references and confused easily due not being use to interacting with other people thus he prefers to just watch and listen or be alone and go off exploring, he is laid back and friendly with a strong sense of justice and is willing to fight to protect those around him. While laid back and friendly he gets upset if someone calls him "soulless machine" or when others are afraid of him, making him rather hesitant to show himself to others.

Technique cloning: the ability to mimic others attacks but only physical attacks and cannot replicate energy Or projectile based ones. "Let's see how you like it"

Emerald shield: lets him temporarily make an invincible green shield it only lasts ten seconds and can't be used more than twice without recharging, he also cannot prep other attacks while shielding. "Try breaking this!"

Plasma blast attack: ranges from a continuous beam to multiple bursts, the most draining on his battery. "You asked for it, TAKE THIS"

Burst homing attack: charging up allows him to lock on and deal multiple homing attacks to multiple or single targets. "Multiple weak spots?. No problem"

physical abilities:
Super peel-out: can run in place for a moment to gain a powerful burst of speed.

Spike drop kick: a powerful heavy kick from the air, his go to move.

Strengths
-close combat and adapting strategies.
-greater defense due to having a unique hard alloy shell.
-expert in information gathering, learning about people, fighting techniques and how to read them.
-flight, able to maintain hours of flight time and hovering.

Weaknesses
-engine prone to overheat leaving him with limited combat options.
-comes short in long ranged combat due to his only projectile attack being the most draining on his battery and engine.
-inherit weakness to energy based attacks (lighting, chaos control,etc.)
-Massive weakness to cold and ice due to not being built with freezing resistant metal.

Friends: Arc the echidna (A boxer and the one who originally found Gear on little planet)

History: created by an unknown person Gear was unearthed on little planet in the quartz quadrant zone, he Stayed on little planet honing his fighting abilities And training with Arc, developing his personality over the course of a year, he left little planet after it arrived over Never Lake and proceeded to travel to Westside island and go through the many zones there, after exploring he found the remnants of the labs of doctor Eggman and learned about the history of mobius and it's inhabitants. Gear has since then took it upon himself to uphold the code of the freedom fighters and protect the world, he has yet to encounter any freedom fighters or Eggman aside from a few badniks, mainly on purpose due to the fact that he himself looks like a badnik and wants to avoid making himself known until he feels ready, he has been inside city's a few times but has found it not safe due to people being afraid or plain avoiding him.
With no memories of what or who he is save his name and sense of justice He travels the world in search of his creator and looks to find adventure and friends as well as a place to call home. 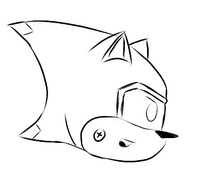