Hello there, this is PyroGX and I'm happy to be here!
Was just bored, looking around for a new RP forum when I came across this. A while ago I wanted to stray from Sonic RP stuff with my characters, make my own universe for my friends to RP in, but things have quickly slowed down and died off and I needed something a little more active if I was to keep RPing.

Since I was young, I've been making characters for a while, mostly inspired by the Sonic series as it was what got me into game design and writing(Somewhat ironic, given Sonic games aren't known for very good writing. Still, Sonic wasn't my only inspiration). As time went by, with constructive criticism I fixed what was needed. With heavier fixes came heavier changes, thus, the "Generation" system. Currently, I'm in Pyro G4, which was me personally thinking of what would make RPing more fun for me and others. Less complicated story than G3, and Pyro was no longer a canine - frequently overdone in many fandoms - but instead an eagle, something I felt I could do more with.
I enjoy fighting and action RPs the most, and while my characters are geared toward combat, that isn't all I do. I will mention that my least favorite genre of RP is romance, and thus any situation for romance that may arise could be potentially shot down, especially by accident.

I'll try and be as active as possible, though as usual life can get in the way. I'm just here for some good, drama-free RPing, and I can't wait to get into the action. I am currently in the middle of reworking Pyro G4, and I'll also need to fix it up for Sonic RPing again(been a while since I've used Pyro in Sonic RPs), so it will take a while, but I'll probably be in the chat, maybe around the Forum Games until then.
_________________

Hello, new member! I'm Elec, one of the admins, so like, if you need any help with an RP or a character or a rude person, contact me or any of my staff friends, the fastest way to do so being the PMs or Skype c:
Speaking of Skype - we've got a Skype chat group if you're interested in it. There's some restrictions about joining it, but you can read more about it in "The Forum" subforum. Yes, I know. Best name ever. You'll find it easily!
Oh, and by the way - don't worry about adjusting your character to the Sonic canon. We've got a lot of charas here, ranging from your usual hedgehog heroes to intergalactic travellers that just came by Mobius as tourists and decided to settle down here - your character might as well be an alien, and it'll still be okay! Though of course it's your character still, so I'm not gonna tell you how to change them xD
as long as you don't break any rules with 'em *INTENSE STARING*
Aaaand I'm fairly certain you'll find quite a few people interested in action/fighting RPs. If you find any RP that will seem interesting, just ask to join first, I'm sure people will let you in c: And if not, then you're even more free to make your own~
I hope you have fun here! Good luck with the character tweaking x3
_________________
Avatar made by Uncanny Illustrator c:

Heya, Pyro! I'm The Red Blur/Red/Blue (never gonna let you live that one down, Elec

)/Caen/whatever-the-hell-you-wanna-call-me. I am in fact not an admin, and I'm kinda a noob like you, considering I've only been around for four(?) months. I like a good bit of combat, but usually in story/character-driven RPs, so hopefully I'll look forward to RPing with you in the future! 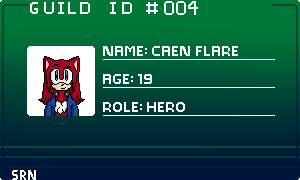 Are we the future of this burning Hell?

Fantastic art of Caen done by the damn fine Electrisa!

Welcome to the forum!

Similar topics
» Whats your fantage level non and/or member
» ...INVITATION TO BE A MEMBER OF MY SECRET TEAM...
» How many Mybrute Members
» New member!
» ToonTown!