Mobians in space
Description I know at first this sounds kind of stupid but listen I think I can change how you think about how fun it would be from the title which I will probably change, if you guise want to give recommendations for the name just pm me or reply to this post, ok now back to the role play, imagine this. "It's dark, you think where am I? (Memories flood back to you) oh yea my shuttle was destroyed. Well better get back home before the army says I'm dead or lost in space or something. (You go back to your home "planet")


At first you might think why a role play like this, well I would say that I want to get the whole site pumped up for Star Wars coming out in December, but if you don't like Star Wars then don't just close this post I want you to hear all of this, when you first start this role play you will start out with being a captain of a small battle ship (please don't start thinking this is cliché) or the captain of a small transport ship, if you chose the battle ship you can have lots of weapons but limited space for cargo. If you chose the transport ship then you can have not so many weapons but lots of cargo space. Listen to this if you are going to go solo not trying to work with anyone I recommend a transport ship because then you don't have to go back to planets as often to get more food and supplies but if you chose the battle ship in the same situation then you could protect yourself easier but have to go back to planets to get supplies very often depending on how large your crew is and if your the only one on your ship you need to hire workers to work on your ship like in weapons or in other important places or else they won't be operational.


Ok now down to some other things, this takes place in the future so don't rage at me for getting sonic stuff wrong (fyi this will be non-canon) now mobians inhabit other planets (and we do meet other "aliens" but they look exactly like regular people/mobians) and have created planetary armies, here are the list of planets and what is going on when we will be role playing.


Planets.
Earth -if I'm right that is where mobians originated like sonic- the whole planet has been deserted for 500 years then we came back development has started and no major conflicts are going on at the moment


Yumalania what we thought would be an uninhabitable planet was changed because we found a way to make planets that can not sustain life will be able to by mass terraforming. No major conflicts just a small outbreak of thieves


Venrial a planet where almost everywhere on the planet is a mountainous area with a few exceptions of plains and forests is small areas. Almost the whole planet is stuck in poverty due to a terrorist group named Lost Lotus


Treoter a planet known for its abundance of natural materials, often illegally mined in places by bandits, no major conflicts


Iophus the only planet affected by the frozen anomaly (planet does not rotate or orbit the sun) yet known for its beautiful scenery, abandoned due to night side starting to freeze yet people live on the sun side still but the planet is starting to get scorched on that side. No conflicts whatsoever


Veruta a planet blood stained from countless wars and mass murders, lots of conflicts going on here (the war planet) all cities evacuated with few refugees on the planet


Plaibos a planet with very rich farming soil, not many conflicts just a few bandit attacks, good place to go to get food.


Remia the planet of paradise, absolutely no conflics never will be, planet only exists in myths though.


Iolia the planet of scorched sands, whole planet is a desert of sands. Very rich in sand crystals which are useful for weather generators, some conflict but only gang wars and bandits


Surus a planet of vast volcanoes and stone covered plains from cooled lava, very useful in the stone mining department, only fights about whose land is whose and illegal miners


Toturn a planet that was shattered into 5 pieces (literally the planet was blown up and now is in 5 pieces with a few smaller pieces floating around) the chunks just orbit around the core of the planet.


-all planets below here have not been terraformed-


Jevis is known as the planet stuck in time. The planet won't drop there beliefs of 100s of gods that they have belived in for 3000 years, no conflicts because they belive that if they have or participate in war they will be punished by the gods


Tania the planet of flowers, this is a planet that just loves nature so much that they live outside with no tents or beds just on the ground, conflicts between the terraforming company and developers.


Solea one of the 2 twins of earth, the continents are not shaped the same but the characteristics are very similar, lots of conflicts between the original inhabitants of the planet and the explorers of the galaxy


Kalara the other twin of earth same description as Solea, except the original inhabitants of the planet agreed to co-existence, a few bandits and wars to a small scale


Cleyotune the planet of the warriors, very simple description kind of like the final fantasy 8 planet still using swords and shiz but has space ships, so the future fantasy planet, yes there are conflicts between hostile creatures and bandits with some wars on a small and large scale.


Earths armies
UPSA (United Planet Spacial Army) -still working on names of planets or armies so if it sounds stupid please tell me- there goal is to unite all planets like a large democracy getting all planets at a equal state as a democracy no more poverty and they will attempt to take you down if you get in there way. (This army is available for all planets)


Flaming Angel Army, there goal is to work for money they are a army of mercenaries if you pay them they might become mercenaries for your army.


BSF (Brenatarian Security Foundation) they are just the average security foundation you would see trying to protect something or guarding prisons.


YSF (Yumalanian Security Force) there goal is just to protect Yumalania from invaders or thieves. Same kind of story as BSF


SandScar Thief Group, the group of thieves on Yumalania trying to gain power to take down UPSA and there leader become the supreme leader of the Galaxy


Lost Lotus, a terrorist group that there goal is to control the Galaxy so there later children
will have the rights that there ancestors and themselves had lost in there childhood.


Glenexrian Rebels -working on a name for this one too- there goal is to get there planet
to become a democracy.


Glenexrian Royal Army, a army protecting the royal family and are against being a democracy.


Core Crusaders there goal is to ever so slightly mine deeper into there planet to find precious materials, and to protect there planet


Glade Protecters there goal is to prevent terraforming on there planet


Name of character you wish to use:
Planet currently on:
Planet you came from:
Planetary army: (leave blank yet still have this column for freelance nomad)
Space Battle Class:
Ground Battle Class:
Spit up skill points (you start with 12)
Mechanical:
Engineering:
Healing:
Repairs:
Close Combat:
Ranged Combat:
Charisma: (basically negotiation skills)
Sneak:
END OF SKILLS
Any extra notes you want me to know. Including char powers/abilities

If you Join I hope you enjoy it. 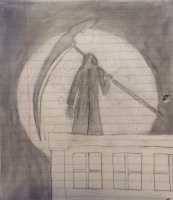 I haven't read all of it yet, but I'm interested, when I finish, I'll post an application.

(Might not be like the srn Travis, since skills are decided by d20 rules, but I kind of supported his likings to that.)

For all who are reading the comments i thank you
I wanted to state a few things that might have been in the description of the roleplay or not
1: You can have your character with all of their special powers YET they will not be as how do i say this, as powerful yet i will decide how that fills out
2: yes we are using a d20
3: And just have fun

Thanks for joining and here is my application

Blitz you have 12 points not 7

lol, I was doing something with the post and forgot to alterate it.
_________________
They say truth is the first casualty of war...but who defines what's true?
Truth...is just a matter of perspective. The duty of every soldier is to protect the innocent, and sometimes that means preserving the lie of good and evil - that war isn't just natural selection played out on a grand scale.
The only truth I've found is that the world we live in is a giant tinder box. All it takes...is someone to light the match.

I love DND, and since the nature of my character, WHY NAUT? I'll be using the older version of Envy just incase you are wondering
_________________
Thanks to the amazing Uncanny-Illustrator for the adorable avatar!
Character: Envy.

Ye Thanks toothless and i was wondering if you could please fill out a application to make this 10x easier, Thanks again

Just a question.... What if a character specializes in the use of both magic and a kind of close-midrange weapon?
_________________
Thanks to the amazing Uncanny-Illustrator for the adorable avatar!
Character: Envy.

Just add what you want to say in "Extra Notes"

It appears I will not be able to join this one. The other roleplays I've been waiting on finally started up, sorry for disturbing inconvenience.
_________________
Thanks to the amazing Uncanny-Illustrator for the adorable avatar!
Character: Envy.

This is still open to whoever wants to join