@ Terror Just wondering...Would this be Envy and Gahiji's first or second encounter (Since the other roleplay they are both in...I'm asking this to also keep track of a timeline I keep)
_________________
Thanks to the amazing Uncanny-Illustrator for the adorable avatar!
Character: Envy.

@Toothless I'm guessing their first encounter. The other role play takes place some time after this one. 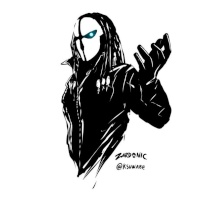 Yesssss. At long last, the worst of my writing is over!
Before I go and start posting, I do have to sort out the beginning of the rp with my antagonists.
So, Blitz and Terror, the rp is actually going to start at a location about 10 minutes away from where your characters are meant to meet up with the 'package'. As a result, your entrances into the rp will be slightly delayed, as opposed to those of anyone else joining since I assume they'll be in that general area that shit goes down.
So, clearly, your characters both need a way to get to where their target is. Transportation for both of them will have been arranged so that they can stay close to the target during the trip. Will that be okay with you guys if that same vehicle is what brings your characters to the scene? That way you'll both arrive at the same time and I can cue you both in quickly and easily and you can jump right into the action with your first posts.

That'll be perfectly fine with me.

So, let me get this straight: Terror and I are going to be brought in via a jeep, or whatever you choose, so we get cued in on a correct schedule? Hmm. Fine by me.
_________________
They say truth is the first casualty of war...but who defines what's true?
Truth...is just a matter of perspective. The duty of every soldier is to protect the innocent, and sometimes that means preserving the lie of good and evil - that war isn't just natural selection played out on a grand scale.
The only truth I've found is that the world we live in is a giant tinder box. All it takes...is someone to light the match.

Awesome.
And I haven't really made decision on what kind of vehicle they would be traveling in. It's a long trip, though, so I have considered anywhere from, like you said, a jeep or a van, or even an R.V. Anyone have a preference? Particularly since that'll likely be the means of transportation if and when we reach that point so it might as well be something you guys think your characters are okay with riding in, right?

Yeah. I'm cool with this. A jeep or anything off-road would be good I guess.

I like Jeeps :3 Too bad I don't have one 3':
_________________
They say truth is the first casualty of war...but who defines what's true?
Truth...is just a matter of perspective. The duty of every soldier is to protect the innocent, and sometimes that means preserving the lie of good and evil - that war isn't just natural selection played out on a grand scale.
The only truth I've found is that the world we live in is a giant tinder box. All it takes...is someone to light the match.

A jeep it is, then! I'll post the rp sometime today (Tuesday) and post a link to it here as well once it's done. c:

Finalmente!
The rp is posted and ready to roll! It's quite a read, but what can I say? I like to be thorough and leave nothing out. It's under the same name as this topic, but you can also just click here to go straight to it!
Terror and Blitz, don't worry, I'm going to cue you guys in as quickly as I can. But I'll give my beasty a tiny headstart to give things a chance to get interesting and see if any allies are to be found. :P

Other than Terror and Blitz, Thunder is the only other civilian who posted in here. He hasn't been on since Monday. But my plan is to wait a week and if no one posts, I'll jump forward to let Blitz and Terror join. c:
So you can continue to wait for Thunder if you'd like or go ahead and post. If you post before him, I'll just wait 2 more days from your post before replying myself so we can get things moving and reach a point where I can bring in Terror and Blitz, too, so they don't have to wait long. There will be plenty of time for people to join in even after things start moving along. :]

Alrighty! Today is the last call to jump into the rp before the "villains" do!
Tomorrow, whenever I get a chance to not be at work and if no civilians have shown up, I'll be posting a small timeskip forward to have Blitz and Terror's characters arrive.
If we do get other characters in before then, I won't do the skip and they'll have 10 minutes before trouble shows up. We'll see what kind of mess happens from there. :P

Page 2 of 2
Permissions in this forum:
You cannot reply to topics in this forum
Who is online?
In total there are 9 users online :: 2 Registered, 0 Hidden and 7 Guests :: 1 Bot