A survey on the Tribal timeline

The idea for Tribal is pretty obvious if you know about the Sonic relation to it. The fanbase ain't that big but it does give some interesting ideas for RP and fanfictions (One of which I'm allowing entry for OC's in a story back on my Deviantart : ZeDoctorIzVellArmed, just an FYI ) Basically, it's a non-canon RP based around the Mobius world in more of an 'Indian-Style' era. No technology, and limited weapons and materials. Similar to that game called 'Survivor' or something like that.

Do to complications for certain OC characters for people that wish to join, I am announcing that cybernetic/robotic limbs are non-existant and therefore may hinder the use of some OC characters for obvious reasons. My OC only has a cybernetic right, therefore she'd have no right arm if I were to use her. Any limbs that require a complete metal version of would be gone (Note that this may force me to reject characters with Cybernetic hearts, for example. As no one can live without a heart. Laws of Physics people!) But this is also where the new part comes into play, leading me to my next point... [Completely Native*]

I'm allowing a poll. I've come across more than my fair share of Tribal Sonic stories where they exist during the current timeline (Archie Comics to Sonic Boom). A perfect example would be 'Were Tribe' [Long Lost Tribe*] by Snow The Werefox on Fanfiction.net. You can read the story here ( https://www.fanfiction.net/s/8866125/1/Were-Tribe ). An example of both of them combined would have something like the story here ( http://lord-kiyo.deviantart.com/gallery/23583866/Sonic-Tribal ) [Combination of Both*]

This is simply an idea for now and I think it could work out. Should any concerns pop up that I may have missed, feel free to say so and I would gladly talk to you about it. Please remember that I linked fanfics and you could read those to get a good idea on how the RP could be played out. I've got like 4 different versions in my head by the time I post this. Another thing; this is no crossover. Simply the Sonic World put in a different timeline on the same planet. With that said, I leave you to your thoughts.

EDIT: Uh, quick notice, this idea won't start until I have maybe 10 votes on the poll, give or take a few depending on how many people actually vote. Also, if you vote, please state your character name so I can sort out any complications that may appear. I recommend putting multiple names in case what you voted for does not happen.

Re: Tribal RP Idea, Quite Interesting 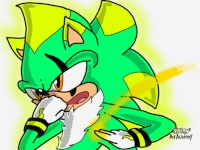