Social Status: None Yet

Other Family Members:
- None

Other:
- Unaturely strong for a leapard.

Strengths:
- Able to use both demonic fire magic and healing light magic, Able to call on some of her former demonic strength, Experienced in combat.

Weaknesses:
- Not used to her new body, out of practice in combat, Unable to be near malice filled demons.

With Strangers:
- Easy Going and polite

With Family:
- Pained and hateful

With Enemies:
- Hateful yet sorrowful.


Backstory:
Zetra's origins are as mystrious as her sister, Esper. They both lived on the Mirror Moon with another demon named Daltyn. As the went from one dimention to the next, they were joined by Kamyr, Khazra, Mira, and Minos, who all became demons durring their time on the Mirror Moon. Then one day, they appired in Sonic's universe, many centuries in the past. Her sister went to see if the world was worth the stop and she returned sometime later with Arado Rustfang. It seemed that he saved her from some local bandits. Zetra started to feel odd when Arado came and she confronted him about it. To her surprise she had a hard time trying to explain it. Arado explain that to her that she might be in love, but Zetra could sence that he had the same feelings. Arado continued to woo her for the next few days when Zetra senced that he felt bad about someting.


Zetra asked him if he was ok and Arado told her that he felt that he could not live with them. Zetra was confused as for a bit as he told her that he felt that his place was on the planet below. Zetra started to feel sad and once more this confused her. Arado was mortal and she was a demon. They could not be more different and yet he seemed that if he could not live her, he'd resign himself to death on the planet below. Zetra told Arado to follow her and lead him into the Fusion Ordanace Ultama Launcher's Logistical Operational Reaction Device, also known as the F.O.U.L.L.O.R.D., control room. She instruced him to help her reprograme the computer to distroy the Mirror Moon and they would escape. Arado was shocked at first, but Zetra explained that if he didn't wish to stay here, she would go with him. Arado gave a mint leaf pendent to her and toled her that it was incase they got caught.


The two worked over six hours to reprograme the computer when Daltyn walked in on them. Daltyn suspected that Arado would do something like this and attacked him, knocking Zetra to the floor. Zetra watched as Daltyn ran his sword into Arado's chest. Zetra's heart was broken as Daltyn tried to rip his sword out of Arado's body. The blade of his sword broke off as Arado slumped over. Zetra completely lost it and attacked Daltyn. Daltyn was surprised as Zetra activated the F.O.U.L.L.O.R.D.. Zetra felt the deathly beam of the machine doing it's job as she died, holding Arado's hand. She felt her spirit floating and was surprised to see that the Mirror Moon was not distroied as planed. The other were dead save for one, her sister Esper. She blamed Arado for this and set about trying to fix. Zetra watched as she kidnapped victem from the planet below and drain their life force to keep her going so she could get the F.O.U.L.L.O.R.D. working once more.


Zetra could do nothing but watch as each victem had his or her life sucked away. Then one group that was brought in, Zetra senced a familier presence. She watched as one name Kale Komet had seeming distanced himself with the others. She also senced another demon had arrived and she knew that this could be her last chance to end this. Without him knowing it, she guided Kale to find Arado's journal and helped him build a machine to contact someone for help. After that Zetra watched as Kale fooled everyone and seemed to come out the bad guy working with Dr. Eggman. However, when Eggman double crossed him, Zetra felt bad that he might get killed by Esper. Zetra continued to watch as Sonic beat Eggman and saw Kale had come in time to tell him the truth about Esper. Once banished, Zetra continued to look on as Sonic and Nack faught and defeated Esper, distroing the Mirror Moon in the proccess.


Though the Mirror Moon was now gone, Zetra's spirit wandered about for a few years when she senced an attack in a small desert village. She could see the village in ruin and could feel that this is where Arado had come from. She also senced that this was the work of her sister, whom she thought died two years prior. She then saw one figure emerge from the smoldering ruins and she reconised him. It was Kale Komet. She appired before him and begged for his help to stop her sister. Kale recalled her name and questioned her true feelings. Zetra gave him the pendent that Arado had given her and Kale seemed to reconise it. Kale told her that he would belive her for now and went off. However Zetra felt that he might not be able to do it alone. Zetra once more appired before Kale near a skeleton and asked him to put the pendent on the skeleton. Kale was reluctent and untrusting, but he did it.


To Zetra's surprise she found herself looking over her new body, she never expected to be revived. She asked Kale to allow her to go with him. At first Kale refused, after coming over the initial shock of what had just happened. He felt that it was his problem and no one elses. But Zetra wasn't going to take no for an anwser and told him that she will go with him, at least to help him get to her sister. Kale begrudgingly accepted under the condition that she'd get some newer attire as the rags she had own wouldn't make the trip. Zetra went back to the ruins of Rustfang Village and found some clothing that fit her. As she looked into a cracked mirror, Zetra saw her refection. Part of her demonic from had seemingly left her and looked closer to a mortal. She also noted the red and black mark on her head with the Amethyst as well as two sharp black teeth in her smile.


However she could also see her demonic side wanted to break free as the mirror suddenly shattered towards her. For her first time, Zetra had felt fear. After a moment, she shook off the incedent and rushed off to meet up with Kale so the two could go and find her sister, Esper, and put a stop to her for good.
_________________
Life is Moot. 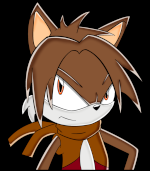