“never walk alone in the park. Because when you do, This creature could lock sight on you. And he wants to befriend you no matter what the costs. Look out for this obnoxious cyan kitsune jogging around the park.”

Boubka is a cyan kitsune with two black-tipped tails. He has emerald green eyes that sometimes seem to glow a bit. He also has a stripe-like scar on his right hand that is the same color as his eyes. He wears blue wide jeans and a green hoodie with white/red shoes. His dark brown hair is slightly long and messy. You can see he doesn’t do anything to style it. His neutral expression is already giving of a bright smile. 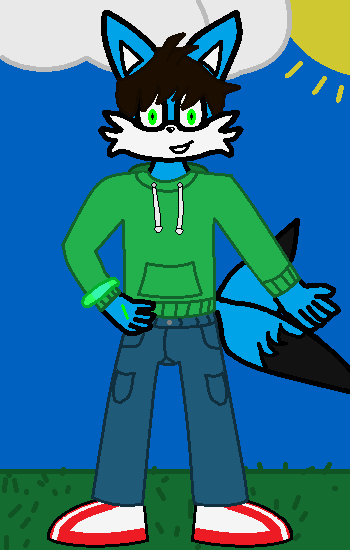 Physical stats (On a scale from 0 to 10):
Speed: 7.5 Can reach high speeds. He doesn’t get outrunned fast and can keep up with the major amount of fast mobians.
Strength: 6 Although he can leave some heavy punches and lift up two full shopping bags, he can’t go really further than that.
Intelligence: 6,5 Boubka is not a mastermind, but has the ability to quickly think strategy's through, Although he does lack some logical wisdom here and there. He is good in solving puzzles.

Agility: 7 Boubka can bend away quickly when an attack is incoming. He is pretty agile but never trained gymnastics. So don’t expect him to do a double flip after swinging on a pole.


Attacks
Boubka is born with a genetic mutation. This mutation causes him to control and create Chaos Energy. Chaos Energy can be created by getting shots of adrenaline.
Basically, he's a Fox form of a Shadow, although he doesn't need a chaos emerald. Ya see, he is a Chaos Kitsune. A few hundreds of years, while echidna's protected the shrine, some foxes lived in caves close to the master emerald. because of the chaos energy's radiation, foxes became two tailed and stuff. Oooooh creepy. Their adrenaline gland mutated to generate chaos energy whenever adrenaline should be generated. That is basically Boubka's power. He can manipulate chaos energy in his blood. Very dangerous yes. Can get out of control and stuff. Could go very edgy any second.
Boubka can use this Chaos Energy for these attacks:
Chaos bullet: Similar to a chaos spear. It’s a small bullet that can be shot at high speeds when controlled right. Boubka uses this if he wants to leave a quick attack. This attack costs less charging. It leaves off a shock effect.

Chaos beam: his most used attack, a beam as big as both of his hands. This also leaves of a shock effect

Chaos control: Boubka can stop the flow of time by using his powers. This could sometimes be the result of a reflex, which makes him a really good fighter, although it costs some energy.

Chaos sword: He creates a 1 meter sword out of chaos energy. It's just as effective as a sharp sword. This sword acts as a normal solid sword. It is still sharp of course.


Chaos gauntlets: Boubka creates gauntlets that give him some protection and strength. Mainly strength though. These gauntlets are purely solid and never leave a burning or shocking effect, only if said otherwise.

Bloodstream sensing: Every mobian has some chaos energy in his blood. Although it is a miniscule amount, Boubka can still sense this energy. It is very unaccurate though. Most of the time it can only tell him that there are mobians present in his area.

Electrisa: One of his best friends despite the age gap. He thinks she's one of the few persons on the world that thinks just like him.

Alina: Although they don't share a lot of similarities, Boubka and Alina are very good friends. Alina found Boubka uncounsious after the events of the destruction of Station Square and took care of him.

Enemies: Doesn’t necessarily have an arch-enemy. But people who’re doing bad things to other people are pretty much his enemies

Drake (Father): Drake is a dark blue, hyperactive fox with passion for exploring. He knows how to survive in many bad circumstances. He is also very impulsive. Together with Boubka’s mom, his job is to explore certain areas to find ancient buildings or sacred treasures. Once found, others would continue his job in investigating the buildings. Some say that he’s sort of a treasure hunter, although he’s never really searching for one. He just loves to explore.

Lara (Mother): Lara is a calm, green kitsune. Although being very good at helping her husband in exploring sometimes dangerous areas, she is very sweet and always calm. She also has the ability of controlling chaos energy. She is the one that learns Boubka how to use it. She is the most serious of the family, although that doesn’t say much.

Luka: Boubka's lovely sister. She's two years older (18 years) than Boubka. When her parents are gone, she is a serious sister that has all the responsibilities. When her parents are home though, she is a happy-go-lucky girl wandering around all the streets of Station Square. She doesn't have access to chaos energy, which would make her defenceless if it wasn’t for her to eagerly learn fighting tactics from her dad. She is an experienced fighter and isn’t afraid to chop something.


Strengths:
Friends. Boubka couldn’t do anything without them. He’s always seeking for new ones and he can build on them.
Boubka is really good at knowing how others feel. Even if he has never been in a situation like that of another character.
Trustworthy. Although being pretty naive about things, Boubka is always a person you can call for help if you need it.
Go-getter. Boubka doesn’t just give up when the foe seems too strong. He still does know when to flee a fight.
Good at shooting from hand. After shooting many chaos bullets, he knows how to aim.
Can handle a sword: Since he can create one, he has some basic skills, but he’ll not be able to defeat a experienced sword fighter in a hand-to-hand battle.

Weaknesses:
Loneliness. Put Boubka in a room without people for some time and he gets depressed. Does nobody like him?
Friends. Yes this is a strength and a weakness. Boubka makes friendship way too fast. This could cause for trusting the wrong persons. When you hurt one of his friends Boubka can become an impulsive target. He would do anything to hurt you back.
And when you kill one of his friends? He gets depressed. Like for real depressed. So don’t do it.
Distraction. Boubka get distracted really fast. Causing him to not pay attention to what others do.


Accessories:
Chaos Bracelet: Boubka wears a green-ish but transparent bracelet that works as a recevoir for chaos energy. He can fully load it up by holding a chaos emerald or he could really slowly load it up when having an adrenaline rush. Without the bracelet, Boubka has 40-50% less chaos energy to use.

A few notes:
-Boubka likes to share chocolate with people. It seems like his pockets are endlessly filled with chocolate!
-Boubka can be very annoying at times.
-Boubka could just appear anywhere. So watch out.
-When Boubka is depressed, he slowly gets lack of chaos energy, causing his emerald green eyes to slowly go dim.
-Although Boubka uses chaos energy, he doesn't know much about it. He's eager to learn it though!

Backstory:
Born in Station Square. His parents are adventurers. In his first years, his parents didn't go anywhere to take care of Boubka and his sister. But now, after a few years. they sometimes are away for a long time. Mister Butterscotch, a wise owl, looks on the two by visiting at least once a day. So he learned with his sister to be independent.

On primary school, things didn't go as well. At first everyone liked Boubka, but eventually Boubka told about his powers when he got somewhat older. The other kids were afraid of him and shielded themselves off Boubka. Although eventually, Boubka got some friends back. He found out that if you would just push hard enough, people would show their nice side to him. This gave him trust in every person. That every person has good in themselves.

Years later though (The present), Boubka has seen some people he couldn't befriend. He realized that some people are just pure evil. This mildly matured Boubka, having a bit less trust in every random person walking on the street. However, he still tries to cheer everyone up, just like the old times.