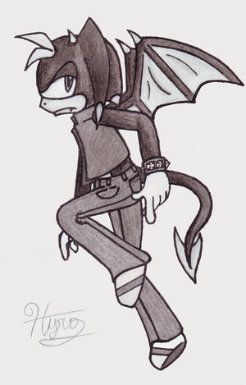 Alignment:
Neutral. It's all a matter of who he supports more. In a fight, if he likes one side better than the other, he will join that side, whether it be hero or dark. He will often side with his friends.

Occupation:
None. He can't get an actual job due to his faulty criminal warrant, so he travels often.

Power/Ability:
He controls energy (No, this isn't the same as telekinesis). This means he can create explosive orbs of energy, waves of stabilized energy, and beams of energy. He can sense people's energy auras and can sometimes even use this to distinguish who and what someone is. He can also create a barrier, however this barrier is limited and only lasts through one attack per battle. And lastly, he can quickly shift sideways using the energy around him to avoid attacks. He has to use his own energy for these attacks, so all of these are limited to the amount of energy he has at the time. He regains energy by eating and sleeping.

Strengths:
He can't breathe fire, but he is still a fire-elemented dragon... Therefore, fire is his strength. He is immune to it and it often helps him recover faster from battle.

Weaknesses:
Water. If consumed, he will cough until blood comes out. Rain gradually weakens him. If drenched, he will pass out.

Fears:
The pain of Death - or what he assumes is death.  He's experienced dying many times due to a generational curse in his family, but he would much rather be in a torture chamber than killed. The experience is absolutely horrible, like being ripped apart from the very inside. What Drake doesn't realize is that this pain is actually caused by his revival, not by dying. His soul tries to escape him, but the curse he inherited pulls it back. The soul is stretched, causing immense pain.
Losing his friends. He will go far out of his way to keep his friends alive and well. He feels that because he's lost someone close once, he wouldn't be able to bear losing someone again.


Personality:
He's a very serious, determined, and straight-forward kind of guy. With him, there's no beating around the bush. He's normally somewhat quiet, but will jump in and out of conversations when he feels it is necessary. He's not really antisocial, though. When around people he doesn't know, he tends to be irritable and comes off as unfriendly. Some may get a hint that he doesn't want to talk to them, which is true in most situations. However, if you can catch him on a good day or do a favor for him, or even stick around and talk to him calmly, you might be able to make a new friend. If he's in a good mood, or something triggers curiosity in him, you'll be lucky enough to meet him with a good first impression, because he's often nicer. Drake may not like speaking with strangers under several circumstances (and is often not very kind toward them), but he does enjoy being with friends and socializing in that kind of atmosphere. He's loyal and protective of close friends and will risk his life for them. He absolutely hates it when people worry about him, and would prefer they worry about themselves over him. This could possibly be a self-esteem issue, but he never flat out says "I'm not worth worrying about." He rarely worries about himself, and even when he does, he acts like he doesn't. He ignores danger, despite how risky it may be. He can be stubborn at times when he's made up his mind already, although he will listen to logic as long as it doesn't involve his own health and safety. He rarely ever surrenders or flees from a fight. He keeps his past to himself, for the most part. If someone brings up his parents in a negative way, he will begin to get angry and eventually become hostile towards that person if the taunting continues. Despite being a drop-out, he's very good at things like problem solving and seeing through lies. No matter what a friend may say, if Drake thinks they are potentially in danger, he will go out of his way to fight along side them. He knows that if he dies, he'll come back. Drake prefers to be occupied with something at all times. When he's alone with nothing to do, he tends to think. For him, thinking is bad, because in one way or another, he ends up trailing back to his childhood memories. He doesn't sleep as much as most people because of his trauma nightmares, which he refuses to discuss with anyone about. Despite all of these things, he never lets his angst show unless someone triggers his emotions purposely.

Bio:
Drake's childhood started off well. Him and his two brothers, Kyle and Jhock, got along wonderfully, always making up games and playing about. Kyle was a year younger than him, while Jhock was 4 years older. Drake was pretty happy at a young age.

When Drake was about six, his father gave him a white jewel. He was still very young and thought it was so cool. When his dad said he could keep it, Drake looked up at him and smiled big. He woke up the next day to find that his parents were gone. He hadn't a clue where they went and ran to Kyle's and Jhock's room, waking them. The three of them searched the house most of the morning. There was hardly anything left behind. Finally Drake came across a note stating:

We have left for reasons we cannot explain. It isn't for any reason concerning you, though, that much we can say. Please do not worry too much; we will be back.

He never saw his parents again after that, which hurt him, being that his parents claimed they'd come back for him. Ever since then his older brother had changed. He started tormenting Drake and Kyle making Drake do any work he wanted done and forcing Kyle to do all the chores. Jhock would leave the house each morning, saying that he was going to hang with some friends. Drake and Kyle didn't think anything of it. On Drake's 14th birthday, he received nothing... Not even freedom from Jhock's constant slavery for a day.

Soon the tormenting grew worse. His brother was gone longer in the mornings, and easily took advantage of Drake and Kyle when he came home. Jhock began beating the both of them up for no apparent reason. He would constantly tell them, "I hate you!" and, "You're such a nuisance!" Drake had no idea that the reason his brother did this was because he was drunk each time he entered the house. He'd never seen alcohol before in his life, for his parents were never associated with it. One day it got drastic. His older brother broke into a fight with him when Drake began to refuse upon doing all of Jhock's dirty work. Kyle watched them from the corner of the room, cowering in fear. The fight resulted in Jhock storming out of the house, mumbling about how he was going to go find some friends.

Drake was bruised in several areas from the abuse, but he just grumbled and slowly walked off to his room. Kyle waited a moment longer before slowly getting up and walking to the kitchen, thinking that maybe eating a few crackers would help him ease down. Drake had only been in his room for about ten minutes before he heard Kyle scream in agony from downstairs. It wasn't just any scream, either... He threw open his door and zipped to the kitchen to find his brother lying on the ground, a knife jabbed into his chest. Blood dripped into a pool on the tile beneath him. The window was open now and a small breeze swept in. Drake hastily made his way over to Kyle's limp body, dropping onto his knees before him with tears beginning to pour from his eyes. His brother had just been murdered and his killer was no where to be found.

Drake pulled the knife from his little brother's chest, shocked by what had happened. With weak, shaken arms, he hugged his fragile young brother tightly, sobbing into his matted hair. At that moment, he heard the front door open, followed by several voices. He looked up just as his older brother and a group of friends walked into the kitchen. Jhock gasped at the sight. Drake was still holding the knife, and because he had been hugging his brother, his shirt was now stained a crimson red. "Oh my Chaos, you murdered Kyle!" Jhock nearly shrieked. Drake couldn't quite get his words straight. "N-No! I-I... H-He was..." Jhock interrupted in a panic, "No! You lie through your ****ing TEETH! I've seen enough, damnit... I have to tell the cops!" His older brother fled from the room as he was pulling out his cell phone, his group of friends following after him, all of them completely astonished. After sitting there for a moment, dumbstruck, Drake gathered enough sense to run to his room and grab his dagger and the very valuable gem his father gave to him the day before he left. He then headed for the back door. He had to escape this place quickly. When he passed the kitchen, he stopped, glancing at his dead little brother. "I'm so sorry... I should have been watching you. It's all my fault..." With that, he ran out the back door with tears streaming from his face. He quickly darted into the forest behind his house just as the sirens could be heard down the street. He ran down the paths, barely managing to get away in time.